The Irrational Bundle
by Dan Ariely 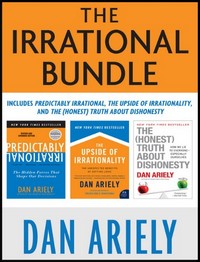 Dan Ariely’s three New York Times bestselling books on his groundbreaking behavioral economics research, Predictably Irrational, The Upside of Irrationality, and The (Honest) Truth About Dishonesty, are now available for the first time in a single volume.

Dan Ariely is the James B. Duke Professor of Behavioral Economics at Duke University and the New York Times bestselling author of Predictably Irrational. Over the years, he has won numerous scientific awards and his work has been featured in leading scholarly journals in psychology, economics, neuroscience, medicine and business and in a variety of popular media outlets, including the New York Times, the Wall Street Journal, the Washington Post, the New Yorker, the Boston Globe, Scientific American and Science. He has appeared on CNN and CNBC and is a regular commentator on National Public Radio. He currently lives in Durham, North Carolina with his wife and two children.