Dan Charnas – The Big Payback: The History of the Business of Hip-Hop

Category: Entertainment Business
This product can only be requested by members. To get this product, you must be a memberApply for Membership 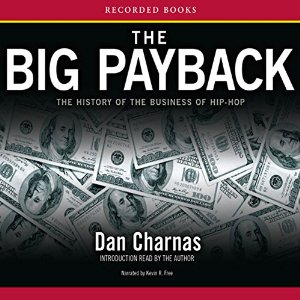 Dan Charnas – The Big Payback: The History of the Business of Hip-Hop

An original journalist for The Source, Dan Charnas built a celebrated career in the rap industry. In The Big Payback, he chronicles the rise of the hip-hop culture and shows how it became so powerful in a matter of decades. Charnas also profiles many of the movers and shakers in this burgeoning cultural movement, offering unprecedented access to an industry that continues to shake the globe.

What “Hit and Run” did for exposing rock music, “Country Music, USA” dissected for Country Music and “Three Blind Mice” examined in Television, “The Big Payback” does for hip-hop. Almost every book on hip-hop has been overly academic, a cash-in or hagiography of the stars. Nobody has touched the nexus of commerce, culture (in particular race) and history in such a suspenseful narrative as “The Big Payback.” Primarily, especially for those of us who grew up with hip-hop, this book opens the doors of what lay behind the music without the hype. And, it is more than just “Mo, Money, Mo’ Problems.” In particular, the historical roots of the music on the streets of Harlem add The Bronx. I found it impossible to put down. I only wish that the electronic version might have contained a soundtrack or maybe a video to punctuate the text.

This book is the most detailed and real to life accounting of the business of music ever written. Details are provided about the “behind the scenes” activity of how the hip-hop business grew into a billion dollar business. The book is vivid and informative to anyone aspiring to pursue a career in the music business. The author Dan Charnas’ account is second to none and a must read for any fan of entertainment. Nothing like this exists to my knowledge. It provides the process of the development of an American art form that has transcended from the streets of the Bronx to the shores of Tivalu. Hip-hop music transformed life and culture in the 20th and 21st century and its fair to say it affected the election of an American president. I haven’t put it down since I picked it up. Go grab this asap!!!

“The man who invented American money lived and died in Harlem.”

Thus begins The Big Payback, a tour-de-force of a book that details the rise of rap music from the burned-out blocks of the South Bronx in the 1970s to the top of the international mainstream music world today. Tracking more than 30 years of hip-hop’s history, it gives readers a peek at the origins of all the major players in the genre today-and the pioneers on whose shoulders they stand.

This sweeping narrative reminds readers that hip-hop has merged with mainstream popular music despite the naysayers who, even today, write it off as a passing fad. One need look no further than the obscure DJs spinning in sweaty South Bronx clubs in the book’s early chapters to the rap stars starting their own companies by the book’s end to realize how far hip-hop has come, and where it may yet go.

In a year that has seen plenty of hip-hop books, The Big Payback stands out as a must-read for any fan (or even any detractor) of the genre.

This book is by far the best, most in-depth report on the culture of Hip-Hop. I thought I knew it all until I read this. It answered a lot of questions I’d had about the rise as well as the demise of certain labels and players in the industry. Very impressive piece of work and I couldn’t put it down.

I’m one of those who discovered hip-hop through black friends and neighbors living in US military base housing overseas way back in 1982, at the age of nine. Like everyone else you ask: Once you heard it back then, you couldn’t put it down and you just had to have more of it. Moving back stateside and into the civilian world, I became that white kid in a predominantly white school system in the 80’s and early 90’s who listened to anything on the Tommy Boy and Def Jam labels, Eric B & Rakim, BDP, Doug E. Fresh, and all the OTHER tracks on ‘License To Ill’, ‘Raising Hell’ and the other joints that went ‘mainstream’. The other few in my circle got into mix tapes, collecting vinyl 12″ records and using a shortwave radio to try and tune in to DJ Red alert and other NYC DJ’s on Saturday nights. Being into Hip-Hop in the 80’s was the best. When you met others who were into it, there was like an unwritten bond; you were part of a club. This was before ‘gangsta rap’ turned every other idiot into a wannabe thug, and also before Hammer and that fraud Vanilla Ice did their business.

In relation to this book, I worked as the account manager for the MAGIC show in Las Vegas, running the off-the-wall ‘Streetwear’ section from 1998-2004. I handled the accounts of FUBU, Phat Farm, Sean John, Damani Dada, Wu Wear and watched Rocawear go from a 200 square foot booth to an 1800 square foot space from one show to the other. I handled all the smaller labels as well, from Joker Brand clothing to South Pole. In that time, I also watched a lot of other rappers and celebrities try to ride the wave of Rocawear’s success by starting their own lines: From Snoop Dogg to J-Lo to Eminem, name it. This experience allowed me to meet a lot of my ‘heroes’ from my teen years. Shook hands with LL, Run, DMC, Rakim, Maseo, Q-Tip, Kool Herc, Doctor Dre, Ed Lover, Guru & Heavy D (RIP), Ice-T, Jay-Z, B-Real, and so on. And, I got to meet Russell Simmons. Good times!

I couldn’t put this piece of work down, becoming immersed in the histories, especially Hip-Hop’s roots on the west coast. Besides all the beef back and forth through all the years about which was better (NYC all the way, baby), I’d always wondered who got it going out there and where Macola records came from in the first place. Now I know.

Highly recommended read for anyone interested in pop culture, especially the economics of it all. Hip-Hop came to rule and still rules, even though the genres golden years, 1988-1998, are now decades behind us. There hasn’t been any other ‘wave’ to grip the country and the world since like Hip-Hop.

I need 5 more general education classes to finish my Bachelor’s degree (YAY ME!) Since I can pick any 5 classes I want, one of the classes I chose was Evolution of Hip-Hop. This book is required reading for that course. When I saw how thick this book was, I was a little upset. I love to read, but only books that interest me. I wasn’t sure what to make of this book. I thought that I knew everything there was to know about the history of hip-hop but I was wrong! This book goes into details about how hip hop began, it mentions the struggles of various rap artists, and it goes into detail about record labels and their management. There was definitely a lot of research that was done in order to write this book! The Big Payback succeeded in keeping my interest the whole time I was reading the book. Great read and highly recommended!

Be the first to review “Dan Charnas – The Big Payback: The History of the Business of Hip-Hop” Cancel reply