Category: Net: Search Engine Optimizing
This product can only be requested by members. To get this product, you must be a memberBECOME A MEMBER 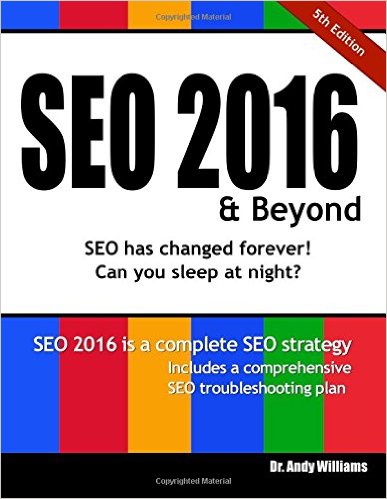 This book follows on from the hugely successful line including the best-selling SEO 2012 & Beyond, SEO 2013 & Beyond, SEO 2014 & Beyond and SEO 2015 & Beyond. In SEO 2016 & Beyond, veteran SEO Andy Williams, with more than a decade of SEO experience, guides you through a search engine optimization strategy that will get you higher rankings and increased traffic without having to worry about Google slaps.

SEO 2016 & Beyond now also includes my “SEO Checklist” which was previously sold as a separate book. This checklist is the same one that I use to identify problems with websites that may be causing penalties and lost rankings.

The techniques and strategies I teach in this book are as safe as you can get in modern SEO. Stop worrying about a Google slap, and start working with Google to get better rankings and more traffic. Let SEO 2016 & Beyond be your guide.

My name is Andy Williams and I’ve been an SEO professional for more than a decade. During that time, I’ve not only used my SEO strategies to build my business, but I’ve taught white hat SEO to my free newsletter group on http://ezseonews.com (clickable).

Be the first to review “Dr. Andy Williams – SEO 2016 & Beyond: Search engine optimization will never be the same again” Cancel reply