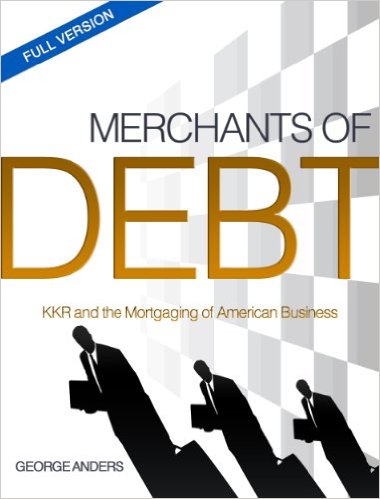 A vivid account of the deals, tactics and personalities associated with Kohlberg Kravis Roberts. The Washington Post called this “the definitive book about the firm and its deals.” The New York Times termed it “refreshing and important.” Publishers Weekly hailed it as “beautifully organized and written in immediate and lively prose.” The book shows KKR’s financial alchemy in action, as the private-equity firm combines borrowed money and borrowed management to create many billions of dollars of profits. Starting with KKR’s formation in 1976, the book goes on to analyze the takeover of companies such as Safeway, Duracell and Beatrice, as well as struggles involving RJR Nabisco.

This is the full-length e-book edition. It includes not only the entire, original text of Merchants of Debt — but also a new preface and closing chapter. This additional material covers KKR’s international expansion, its decision to go public in 2010, and the successes and stumbles of recent deals such as Hospital Corp. of America and TXU/Energy Futures. This edition amounts to about 380 pages; its 15-chapter table of contents appears below. Also available is a condensed e-book edition that spans seven chapters, or about 130 pages.

The author, a former Wall Street Journal reporter, draws on extensive access to KKR founders Henry Kravis and George Roberts, as well as the perspectives of lenders, chief executives and rank-and-file workers associated with the buyout business. Merchants of Debt first appeared in hardcover in 1992. Both e-book editions include substantial updates as of 2013.

2    The Growing Allure of Debt

5    The Enchanting World of Drexel

9    The Discipline of Debt

Be the first to review “George Anders – Merchants of Debt: The Full Version” Cancel reply