George Anders – The Rare Find – Spotting Exceptional Talent Before Everyone Else

Category: Recruitment / Interviewing
This product can only be requested by members. To get this product, you must be a memberBECOME A MEMBER 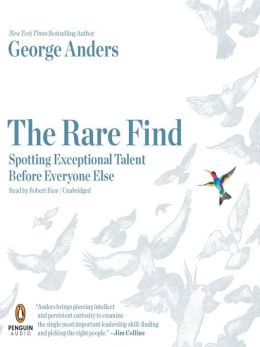 One of the nation’s biggest music labels briefly signed Taylor Swift to a contract but let her go because she didn’t seem worth more than $15,000 a year. At least four book publishers passed on the first Harry Potter novel rather than pay J. K. Rowling a $5,000 advance. And the same pattern happens in nearly every business.

Anyone who recruits talent faces the same basic challenge, whether we work for a big company, a new start-up, a Hollywood studio, a hospital, or the Green Berets. We all wonder how to tell the really outstanding prospects from the ones who look great on paper but then fail on the job. Or, equally important, how to spot the ones who don’t look so good on paper but might still deliver extraordinary performance.

Over the past few decades, technology has made recruiting in all fields vastly more sophisticated. Gut instincts have yielded to benchmarks. If we want elaborate dossiers on candidates, we can gather facts (and video) by the gigabyte. And yet the results are just as spotty as they were in the age of the rotary phone.

George Anders sought out the world’s savviest talent judges to see what they do differently from the rest of us. He reveals how the U.S. Army finds soldiers with the character to be in Special Forces without asking them to fire a single bullet. He takes us to an elite basketball tournament in South Carolina, where the best scouts watch the game in a radically different way from the casual fan. He talks to researchers who are reinventing the process of hiring Fortune 500 CEOs.

Drawing on the best advice of these and other talent masters, Anders reveals powerful ideas you can apply to your own hiring. For instance:

Don’t ignore “the jagged résumé”-people whose background appears to teeter on the edge between success and failure. Such people can do spectacular work in the right settings, where their strengths dramatically outweigh their flaws.
Look extra hard for “talent that whispers”- the obscure, out-of-the- way candidates who most scouting systems overlook.
Be careful with “talent that shouts”-the spectacular but brash candidates who might have trouble with loyalty, motivation, and team spirit.

Each field that Anders explores has its own lingo, customs, and history. But the specific stories fit together into a bigger mosaic. In any field, there’s an art to clearing away the clutter and focusing on what matters most. It’s not necessarily

“George Anders is himself a rare find. A superb writer, he brings piercing intellect and persistent curiosity to examine the single most important leadership skill: finding and picking the right people. By turning his own talent upon this vital and elusive question, Anders has done a great service.”
(-Jim Collins, author of How the Mighty Fall and Good to Great )

“How do you find brilliant performers? The first step is to read this remarkable, groundbreaking, profoundly useful book-which is not so much a book as a detailed map of the newly revealed landscape of modern talent hunting. Quite simply, the best book on the subject I”ve ever read.”
(-Daniel Coyle, author of The Talent Code )

“Resilience, curiosity, and self-reliance are strengths that don”t show up in HR hiring manuals. In The Rare Find, George Anders shows that they lead to fresh ways to hunt for talent. More power to him for daring to advocate that which is not obvious.”
(-Andrew S. Grove, former chairman and CEO of Intel Corporation and author of )

“Well-researched, useful, and entertaining . . . The book not only shows how to find and hire top talent, it also provides valuable advice for anyone looking to enhance his or her own performance.”
(-Steven N. Kaplan, Neubauer Family Professor of Entrepreneurship and Finance, Un )

George Anders is one of the founding writers at Bloomberg View, specializing in opinion pieces a b out the U.S. economy, financial markets, and innovation. He spent two decades as a top feature writer for The Wall Street Journal, where he was part of a team that won a Pulitzer Prize for national reporting. He has also written for Fast Company, The New York Times, Parade, Smart Money, and Harvard Business Review. He is the author of three previous books, including the New York Times bestseller Perfect Enough, a biography of Carly Fiorina. He lives in northern California with his wife and two children.