Joe Carlen – The Einstein of Money: The Life and Timeless Financial Wisdom of Benjamin Graham

The Einstein of Money.mobi
[eBook (MOBI)] 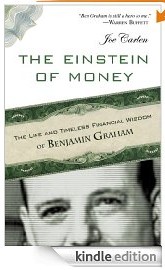 Warren Buffett—widely considered the most successful investor of all time—has repeatedly acknowledged Benjamin Graham, a man he personally studied and worked under, as the primary influence on his investment approach. Indeed, there is a direct line between the record-shattering investing performance of Buffett (and other value investors) and Graham’s life.

In six books and dozens of papers, Graham—known as the “Dean of Wall Street”—left an extensive account of an investing system that, as Buffett can attest, actually works! This biography of Benjamin Graham, the first written with access to his posthumously published memoirs, explains Graham’s most essential wealth-creation concepts while telling the colorful story of his amazing business career and his multifaceted, unconventional personal life.

The author distills the best from Graham’s extensive published works and draws from personal interviews he conducted with Warren Buffett, Charles Brandes, and many other top US and global value investors as well as Graham’s surviving children and friends, weaving Graham’s transformational ideas into the narrative of a momentous life and legacy. Warren Buffett once said, “No one ever became poor by reading Graham.” By the same token, no one will ever become uninspired by reading Carlen’s lively account of Benjamin Graham’s fascinating life and time-tested techniques for generating wealth.

“This well-researched book has some wonderful additional personal items about the father of value investing. It also includes a good discussion of the important basic principles of investing as put forth by Ben Graham.” –Charles H. Brandes, chairman, Brandes Investment Partners, L.P.

“I am heartened by Joe Carlen’s book about my namesake, Benjamin Graham. It reminds me that one cannot be an ‘intelligent investor’ without understanding Graham’s work.” –Thomas Graham Kahn, CFA, president of Kahn Brothers Group, Inc.

“Far from enough has been written about Benjamin Graham, who thoroughly debunked the efficient market hypothesis decades before it was formulated. Joe Carlen’s book The Einstein of Money provides a lucid introduction to Graham and his ideas, and as such does investors a real service. Its message is an essential one.” –Howard Marks, chairman, Oaktree Capital Management

“Benjamin Graham’s teachings have stood the test of time. Joe Carlen is wise to recognize this and direct his attention, and ours, to my mentor’s teachings and life story.” –Irving Kahn, CFA, chairman of Kahn Brothers Group, Inc.

“Joe Carlen explains [his] ideas well and by switching between Graham’s philosophy and his personal life, he gives the book narrative drive. Best of all, he makes the reader want to go back to Graham’s original work.” –The Economist

“Mr. Carlen mines Graham’s memoir, published two decades after his death in 1976, as well as interviews and his own research. He ably recounts Graham’s rise from an impoverished childhood in New York City to his stature as a Wall Street sage.” –Wall Street Journal

Joe Carlen (San Diego, CA) is the cofounder and lead market analyst at Know Thy Market, LLC. He is the coauthor (with Banana Boat© founder Robert Bell) of the business biography From Lifeguard to Sun King, which was on the Wall Street Journal business book bestseller list.

Note: Calibre is a great program for reading ebooks on your computer, as well as for converting between MOBI, EPUB, and AZW3 or from any of these formats to PDF
Get Your Free Copy of Calibre, here: http://calibre-ebook.com/

Be the first to review “Joe Carlen – The Einstein of Money: The Life and Timeless Financial Wisdom of Benjamin Graham” Cancel reply