Peter Drucker – Managing in the Next Society

Peter Drucker – Managing in the Next Society
[3 CDs (MP3)]

Category: Management / Leadership
This product can only be requested by members. To get this product, you must be a memberApply for Membership 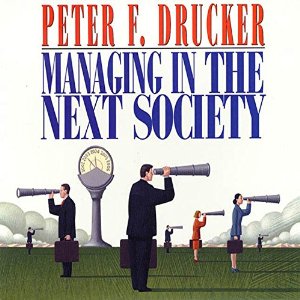 In his latest book, Peter F. Drucker, writer, lecturer, business philosopher, argues convincingly argues the greatest technological changes of the Information Revolution lie ahead and most of them will have little to do with information.

To illustrate, Drucker retreats to the dawn of the Industrial Revolution. James Watt improved the steam engine in 1776; it was not until 1785 when the engine was harnessed to an industrial operation – the spinning of cloth, that society appreciated its benefits. During the following half century, Drucker notes, output increased and the price of cotton textiles fell 90 per cent.

In short order the great majority of manufacturing processes were mechanized. Yet it was not until the 1820s with the adaptation of the steam engine to land based transportation – the railroad – that society witnessed its first new product. It was without precedent and it transformed the economy, society and politics of its day.

The Information Revolution is standing today at the same doorstep where the Industrial Revolution in 1820, Drucker believes.

Some of the chapters of the book, which are essays or articles that have been previously published, deal with management topics; some do not. Although none offers a cure-all, it remains a management book. The societal and social changes will dominate the executive’s thinking for the next 10 to 15 years. His or her response, Drucker says, may be more important for the success or failure of their organizations than their response to any economic event.