Riley Dayne – Age of The Entrepreneur 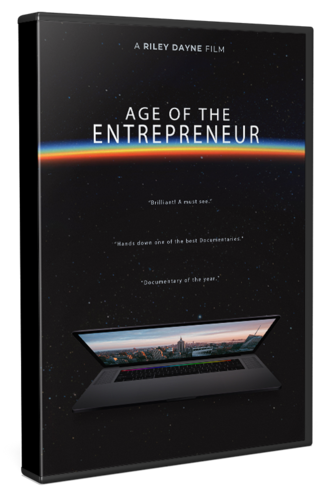 Age of the Entrepreneur is a brand new, feature-lenght documentary about revolutionary entrepreneurs, social media superstars, and billionaire founders.

In this movie, you’re going to be learning from over 24 different entrepreneurs like Russel Brunson (ClickFunnels), Ryan Deiss (DigitalMarketer), T Harv Eker (Secrets Of The Millionaire Mind), Kevin Harrington (Shark Tank), Dave Asprey (Buletproof) Avishai Abrahami (Wix.com) and many others!

This film can change the world!

Entrepreneurs are the ones pushing humanity forward!

So whether you have a dream of starting your own business, but you don’t know where to start, or you already are an entrepreneur and you want to go grow…
This Movie is For You!

This movie is for anyone who wants to take fate into their own hands and build something that can not only change your life forever – but create a business that can impact millions & make the world a better place!

This… this is right now…

This is the Age of the Entrepreneur!

Riley Dayne is an award-winning Canadian Film and BizLearning Writer/Director from Kelowna, BC, Canada. Riley studied film in Los Angeles, CA, at the prestigious New York Film Academy. He is best known for directing several feature-length documentary’s; The Abundance Factor (2015), Age of the Entrepreneur (2019) and Unsinkable (2019). In addition, Riley was a finalist in a documentary filmmaking competition known as “Storyhive”, in which he produced and starred in a Canadian travel series, “The Great Canadian Adventure.”

Uploader’s note: This is the full movie, but it doesn’t contain the deluxe package interviews, wordbook and a training course.