Ronald Baker – Mind Over Matter: Why Intellectual Capital is the Chief Source of Wealth 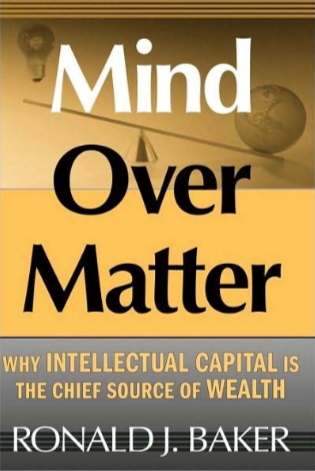 From the Inside Flap

America’s economy has been transformed from a twentieth-century materials-based economy to the Age of the Conceptual-Based Economy—and the currency of this realm is ideas and knowledge. Today’s corporations must prepare to seize the advantages of this new age, or watch as others that are more ready and willing to do so replace them.

Written by Ronald Baker, recognized forward-thinker in the professional knowledge firm sector, Mind Over Matter: Why Intellectual Capital Is the Chief Source of Wealth warns that companies can no longer ignore the growing power of its intellectual capital. Introducing firms to the three components of Intellectual Capital—human capital, structural capital, and social capital—and how to leverage them to create wealth in today’s economy, this book reveals:

The physical fallacy––why wealth no longer consists of tangible things, but of ideas and imagination from human minds

How to develop and attract human capital to your company

Part of Wiley’s Intellectual Capitalism Series, Mind Over Matter introduces readers to those hidden assets not reflected in their company’s financial reports, but fully responsible for creating wealth. A must-read for executives, managers, and leaders—and anyone concerned with getting and keeping a job in the twenty-first-century economy—Mind Over Matter will inspire and challenge readers to unlock the enormous financial and competitive power hidden in the intellectual capital of their corporations

“Ron Baker has written another great book on the thoughts and theories on intellectual capital.As usual, he has an awesome depth of content, knowledge, and thought. A great read.”

–Reed Holden, founder, Holden Advisors Corp., www.holdenadvisors.com, and coauthor, The Strategy and Tactics of Pricing and Pricing with Confidence: 10 Ways to Stop Leaving Money on the Table

“At a time when the virtues that made America great–individualism, hard work, and free trade–are openly debated by well-meaning politicians, Ron Baker gives us Mind Over Matter. It is a story detailing the triumph of human spirit, imagination, and creativity. Ron tells us what the ‘knowledge economy’ really means. He gives a presc

“Ron Baker is an absolute master at challenging the ‘physical fallacy,’ e.g., the basis on which we assign value to businesses by focusing on tangible rather than intangible assets. This book builds on his previous books and helps the reader understand how critical intellectual capital is to the key to success in the twenty-first century. Ron pulls from the greatest business thinkers and economists,?from Drucker to Karl Sveiby as well as current company success stories to fund his rich gold mine of proof. The biggest benefit of the book is to change the paradigm of those who are the passive keepers of the ‘books.’ This is a must-read for anybody who wants to flourish in the age of intellectual capital.”

“This book helps us understand some of the origins and sources that have led Ron Baker to the many contributions he has made to our understanding of good practice in running professional businesses.”

“Reading Ron Baker’s book was the only delightful incident that robbed my sleep on the flight to Frankfurt today. It was sheer pleasure–I must have entertained or annoyed fellow passengers with repeated nodding and several exclamations. Baker has a terrific st

“This is a wonderful read for anyone who wants to explore the power of constructive thinking. In Mind Over Matter, Ron examines the power of creative thought over the conventional wisdom that you must make a tangible product for wealth to be created. The opening chapter sets a wonderful stage for the book, which develops the power of the new business equation and the underlying theory of the various types of intellectual capital. This is a must-read book for every business leader.”

“Peter Drucker coined the term knowledge worker a half century ago. We are all still only beginning to fully comprehend the implications. In Mind Over Matter, Ron Baker has switched on a beacon for us to follow. If we have the courage to embrace the concepts Ron posits, perhaps it will be less than another half century before we begin to reap the rewards as individuals and as a society.”

Available to all users

Be the first to review “Ronald Baker – Mind Over Matter: Why Intellectual Capital is the Chief Source of Wealth” Cancel reply