Tom Butler-Bowdon – 50 Economics Classics: Your shortcut to the most important ideas on capitalism, finance, and the global economy (50 Classics) 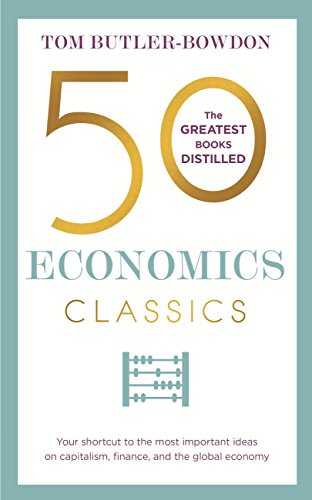 WINNER – SILVER MEDAL, AXIOM BUSINESS BOOK AWARDS 2018
‘Something of a modern classic in its own right.’ E&T magazine

Economics drives the modern world and shapes our lives, but few of us feel we have time to engage with the breadth of ideas in the subject.

50 Economics Classics is the smart person’s guide to two centuries of discussion of finance, capitalism and the global economy. From Adam Smith’s Wealth of Nations to Thomas Piketty’s bestseller Capital in the Twenty-First Century, here are the great reads, seminal ideas and famous texts, clarified and illuminated for all.

EXPLORE the ideas of some of the greatest thinkers in economics:

GAIN the insights and research of contemporary economists and commentators:

DISCOVER the truth behind the headlines in these landmark bestsellers and works of economic history:

Butler-Bowdon has made a name for himself …the breadth of thought is far-reaching and inspiring―The Sunday Mail, Australia

The synopses in this book are fair, balanced, and about as good an introduction to the broad range of modern economic writing, along with a few classics, as one is likely to find.―Professor James K Galbraith, author of Inequality: What Everyone Needs to Know

This is not just a book for people who want to save time by reading one book instead of 50. [It] looks into some huge pieces of economic thought which even many important economists have browsed too swiftly. If you are not an economist, this book will teach you a lot. And if you are an economist, it will also teach you a lot.―Hernan Blejer, economic journalist, analyst for Euromonitor, lecturer University of Buenos Aires, London School of Economics

PRAISE FOR THE 50 CLASSICS SERIES:

Remarkable. Complex views on a whole range of important and enduring issues are made accessible to the general reader. Both enjoyable and instructive.―C.L. Ten, Professor of Philosophy, National University of Singapore on ’50 Philosophy Classics’

Tom Butler-Bowdon is the author of seven books including 50 Politics Classics (2015), 50 Philosophy Classics (2013) and 50 Success Classics (2004). Bringing important ideas to a wider audience, his award-winning 50 Classics series has been read by over a million people and is in 23 languages. The 50 Classics concept is based on the idea that every subject or genre will contain at least 50 books that encapsulate its knowledge and wisdom. By creating a list of those landmark titles, then providing commentaries that note the key themes and assess the importance of each work, readers learn about valuable books they may not have discovered otherwise.

Tom is a graduate of the London School of Economics (International Political Economy) and the University of Sydney (Government and History). Prior to becoming a writer he was a policy analyst for The Cabinet Office and National Parks Service in Sydney, and worked in a variety of UK businesses. He lives in Oxford, England. Visit his website www.Butler-Bowdon.com

Be the first to review “Tom Butler-Bowdon – 50 Economics Classics: Your shortcut to the most important ideas on capitalism, finance, and the global economy (50 Classics)” Cancel reply