Tom Wainwright – Narconomics: How to Run a Drug Cartel 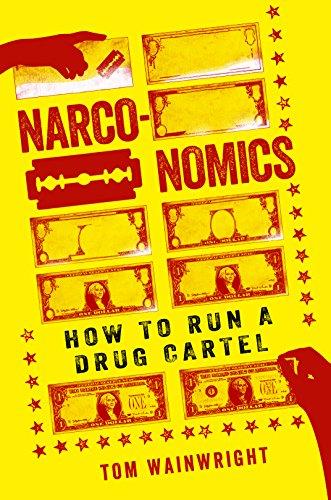 Tom Wainwright – Narconomics: How to Run a Drug Cartel

How does a budding cartel boss succeed (and survive) in the $300 billion illegal drug business? By learning from the best, of course. From creating brand value to fine-tuning customer service, the folks running cartels have been attentive students of the strategy and tactics used by corporations such as Walmart, McDonald’s, and Coca-Cola.

And what can government learn to combat this scourge? By analyzing the cartels as companies, law enforcers might better understand how they work—and stop throwing away $100 billion a year in a futile effort to win the “war” against this global, highly organized business.

Your intrepid guide to the most exotic and brutal industry on earth is Tom Wainwright. Picking his way through Andean cocaine fields, Central American prisons, Colorado pot shops, and the online drug dens of the Dark Web, Wainwright provides a fresh, innovative look into the drug trade and its 250 million customers.

The cast of characters includes “Bin Laden,” the Bolivian coca guide; “Old Lin,” the Salvadoran gang leader; “Starboy,” the millionaire New Zealand pill maker; and a cozy Mexican grandmother who cooks blueberry pancakes while plotting murder. Along with presidents, cops, and teenage hitmen, they explain such matters as the business purpose for head-to-toe tattoos, how gangs decide whether to compete or collude, and why cartels care a surprising amount about corporate social responsibility.
More than just an investigation of how drug cartels do business, Narconomics is also a blueprint for how to defeat them.

An Amazon Best Book of February 2016: Chances are when you hear someone talking about the drug trade what comes to mind is an image from T.V. or the movies—seedy dealers, million-dollar busts, films like Traffic and shows like The Wire. In Narconomics, author Tom Wainwright looks at the drug business as…a business. And it’s fascinating. We already know how internet shopping has changed the way people buy and sell goods, but in the course of his research Wainwright learned that all manner of illegal drugs are increasingly being bought and sold online, too. Interesting, right? Just wait until you read how customer service and product quality have been impacted by this change… And this is just one of the many ways in which an economist’s view paints a very different picture than the one we’re used to seeing. Wainwright’s fresh look at a decades-old problem shows not only how the narcotics industry is run, but also how the “war on drugs” could be more effective if law enforcement started thinking about the drug business as just another corporate jungle. –Seira Wilson

“A lively and engaging book, informed by both dogged reporting and gleanings from academic research…”
—Wall Street Journal

“[Wainwright’s] book is courageous on several levels… [he] challenges everyone at once—the dealers, the drug czars, and the bystanders in between. A daring work of investigative journalism and a well-reasoned argument for smarter drug policies.”
—Kirkus Reviews

“Readers interested in the intersection of crime, economics, entrepreneurship, and law enforcement will find this work fascinating.”
—Library Journal

Note: Calibre is a great program for reading ebooks on your computer, as well as for converting between MOBI, EPUB, and AZW3 or from any of these formats to PDF.
Get Your Free Copy of Calibre, here: http://calibre-ebook.com/

Be the first to review “Tom Wainwright – Narconomics: How to Run a Drug Cartel” Cancel reply